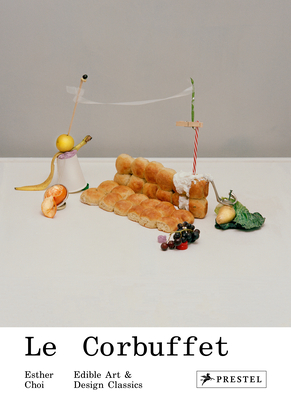 It started as a series of dinner parties that Esther Choi--artist, architectural historian, and self-taught cook--hosted for friends after she stumbled across an elaborate menu crafted for Walter Gropius in 1937. Combining a curiosity about art and design with a deeply felt love of cooking, Choi has assembled a playful collection of recipes that are sure to spark conversation over the dinner table. Featuring Choi's own spectacular photography, these sixty recipes riff off famous artists or architects and the works they are known for. Try Quiche Haring with the Frida Kale-o Salad, or the Robert Rauschenburger followed by Flan Flavin. This cookbook is strikingly beautiful and provocative as it blurs the boundaries between art and everyday life and celebrates food in an engaging and imaginative way.

ESTHER CHOI is an artist and writer, whose photographs have appeared in T: The New York Times Style Magazine, Another Magazine, and Dazed and Confused. She is the co-editor of the collected volumes Architecture is All Over and Architecture at the Edge of Everything Else. Her writing has appeared in publications such as Artforum, Architectural Review, and PIN-UP. Originally from Toronto, Canada, she now lives in Brooklyn, NY.

"...her creations are delicious whether or not you prefer your bread rolls served in the shape of a Florence Knoll midcentury modern couch." —New York Times Magazine

"Don’t be fooled by this book’s spare typeface and strikingly quirky imagery—anyone who appreciates food that looks as good as it tastes will want this book." —Vogue

"...we couldn’t help but eat it up! Choi’s recipes seek to encourage the integration of art in everyday life by distilling the practices of figures such as Frida Kahlo and Barbara Kruger into their best and most delicious aspects" —Design Milk

"This book of photos by Esther Choi is the perfect marriage of food and design, with edible recreations of well known art pieces." —The Zoe Report

“Esther Choi serves up some Mies van Der Roe dip, Florence Knoll rolls, and Flan Flavin in her artwork-meets-cookbook edition Le Corbuffet. And yes, this is but a sampling of the cheeky, art- and architecture-inspired recipes that fill its 256 pages, along with crisp photographs of Dada-esque edible sculptures. This is the perfect gift for the foodie on your list who has a taste for the absurd, or the design wonk who loves to throw a whimsical dinner party.” —Metropolis
“…look beyond the book’s cheeky puns and there is meaty cultural critique…The book’s graphic design underscores Choi’s subversiveness too.” —Quartz

“…a riotous homage to the art and design of cooking and consumption...It’s these knowing recipe intros that combine biography and whimsical quips that make Le Corbuffet an essential conversation-starter for design-loving home cooks.” —Mold

“Cookbooks are a blessing for those who have zero clues about the wonders and tactics of cooking. But, most of them are monotonous in their approach, the same dishes, presented in the same manner across several varieties of these handy manuals. However, one lady is challenging the norm by portraying the dishes in her magazine as works of artistic hews.” —The Artistic Trap