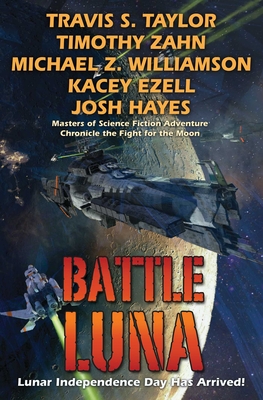 By Travis Taylor, Timothy Zahn, Michael Z. Williamson
$25.00
This book is either backordered or a preorder! Please email for more information

THE EPIC FIGHT FOR INDEPENDENCE ON OUR MOON HAS BEGUN!

The Lunar colony is a mining colony with only internal security capabilities. Nobody had even considered that there might soon arise a need to defend the colony from the Earth! But that day has come. Something has been uncovered on the Moon. Something important. Something . . . alien.

The Lunar colonists perceive this great discovery as their own. Finders keepers and possession being nine-tenths of the law is how things are on the Moon. But as far as the governments of the Earth are concerned, they paid for everything on the Moon, so it belongs to them.

There is only one solution: turn Luna into a battlefield!

“[Y]ou can count on Timothy Zahn for three things: clean, sparse prose; good pacing; and great action scenes. The first book in the Cobra War series hits all those marks in admirable style and makes for a quick, entertaining sci-fi novel.”—Blogcritics

“[Conqueror’s Heritage] is another finely wrought space adventure . . . [with] social, political and emotional complications, all of which Zahn treats with his usual skill.”—Booklist

Timothy Zahn is a Hugo Award winner and the author of the New York Times #1 bestseller Heir to the Empire, as well as the best-selling Star Wars: Thrawn series of novels. Born in Chicago, he earned a B.S. in physics from Michigan State University and an M.S. in physics from the University of Illinois. He sold his first story to Analog in 1978, and immediately attracted attention as a new writer of science fiction based on real, cutting-edge science. Baen published his popular Cobra trilogy in one volume. His other popular series include the Conqueror and Dragonback novels. With David Weber and Thomas Pope, he is the author of novels A Call to Duty, A Call to Arms, and A Call to Vengeance. Zahn has written more than 50 novels, including the recent Cobra Rebellion series entries Cobra Outlaw and Cobra Traitor.

Michael Z. Williamson is retired military, having served twenty-five years in the U.S. Army and the U.S. Air Force. He was deployed for Operation Iraqi Freedom and Operation Desert Fox. Williamson is a state-ranked competitive shooter in combat rifle and combat pistol. He has consulted on military matters, weapons, and disaster preparedness for Discovery Channel and Outdoor Channel productions, and is editor-at-large for SurvivalBlog, which has 300,000 weekly readers. In addition, Williamson tests and reviews firearms and gear for manufacturers. Williamson’s books set in his Freehold Universe include Freehold, The Weapon, The Rogue, Better to Beg Forgiveness . . ., Do Unto Others . . ., and When Diplomacy Fails . . .. He is also the author of time-travel novel A Long Time Until Now, as well as The Hero—the latter written in collaboration with New York Times best-selling author John Ringo. Williamson was born in England, raised in Liverpool and Toronto, Canada, and now resides in Indiana with his wife and children.