ALEXANDER The Forging of a Warrior President (Paperback) 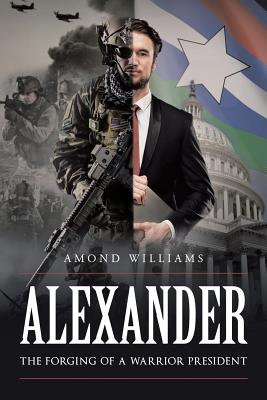 Alexander was conceived during the Fifth World War and the World people were warring, which leads to a fight for survival. The reasons for the wars are never mentioned, but we can infer that the war was about wealth, control, and power. His birth and natural mother situation will reflect the dire and uncertainty of the times. His mother dies immediately after birth, and he becomes a ward of Mary. In Mary's care, he is given the name of the greatest known warrior of many past centuries, Alexander. Mary basically schools and trains Alexander in world affairs and warfare inspired by her dead husband, Colonel John's aspirations. He is trained in the art of war, but also with an added twist of intellectual training. The child's natural, innate, unusual mental abilities to learn, retain information, analytic abilitysix, seven and eight sensescreates a one-of-a-kind warrior leader. As Alexander grows, he is tested mentally and physically, and the results are extraordinary. His leadership abilities are a conglomeration of many great leaders of the past, and his warrior abilities also reflect the many great warriors of the past. These attributions are tested during the Examinations to enter the Roughful Military Institute. Thirty-one others and him survived the almost-impossible trials and challenges of the tests and lived. At the school, under Alexander's leadership, his class exceeds every standard the school tests. And after leaving the school, he is recruited to lead a secret special paramilitary unit, a secret weapon controlled and mandated by the World Congress and the World's President. All impossible missions assigned the Operatives under the command of Alexander are completed successfully. As a result, when the President of the World is threaten, Alexander is called to head the President's personal security force. Under the watchful command of Alexander, all the President's threats to his health are despond or eliminated. Because of Alexander's unique style of leadership and peaceful character, he is voted to replace the President of the World who desperately wants to retire. During his tenure as President of the World for two years, the world experiences a period of peace and enlightenment. Then out of the blue, the World is faced with enslavement and domination from an advanced human race a galaxy away. Again, Alexander's leadership is tested, and he leads the World people to an almost-impossible victory. The World will enjoy a long peace. After a total of ten years, Alexander retires as President of the World; he and his family go home. He and his family will enjoy the leisurely life of the country..