The Son of Black Thursday (Hardcover) 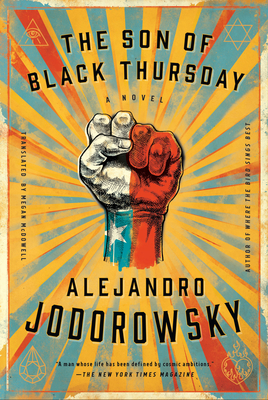 From Alejandro Jodorowsky—the legendary director of The Holy Mountain, spiritual guru behind Psychomagic and The Way of Tarot, and author of Where the Bird Sings Best—comes another autobiographical tour-de-force: a mythopoetic portrait of the artist as a young man in Chile in the tumultuous 1930s.

In Where the Bird Sings Best, Alejandro Jodorowsky’s visionary autobiographical novel that NPR compared to One Hundred Years of Solitude and called “a genius’s surreal vision brought to life,” we followed Jodorowsky’s predecessors as they fled to Chile amid a fantastical array of circuses, Tarot, Catholic and Jewish mysticism, sexual extravagance, political violence, and the ghost of a wise rabbi serving as advisor. Now, in The Son of Black Thursday, Jodorowsky himself takes the stage as we’re introduced to the unforgettable cast of his early years in Chile in the 1930s.

We follow his father, Jaime, who’s obsessed with assassinating the dictator he ends up serving; his mother, Sarah, a giantess who never speaks but communicates through operatic singing; his grandparents, Ukrainian Jewish exiles fleeing persecution in the Ukraine; his twin sister, who is made to suckle a mannequin until she is ten in order to silence her delirious speeches; among other creatures of every description as they struggle against the misery and oppression of the copper mines of the Chilean desert.

As he’s done across media from film to comics to mystic philosophy to fiction, Jodorowsky once again demonstrates his boundless capacity for creating a universe of wonder, horror, humor, magic, and cosmic truth beyond our wildest imaginings. The Son of Black Thursday is a gripping novel from one of our most treasured masters.

Megan McDowell is a Spanish-language literary translator from Kentucky. Her work includes books by Alejandro Zambra, Samanta Schweblin, Lina Meruane, Mariana Enríquez, Álvaro Bisama, Arturo Fontaine, and Juan Emar. Her translations have been published in The New Yorker, The Paris Review, Tin House, McSweeney's, Words Without Borders, Mandorla, and VICE, among others. Her translation of Zambra's novel Ways of Going Home won the 2013 PEN Award for Writing in Translation. She lives in Santiago, Chile.