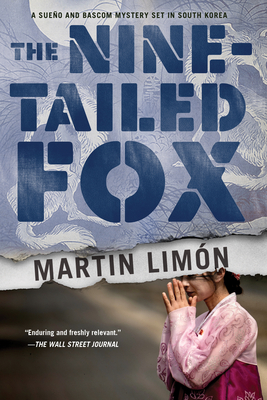 This is book number 12 in the A Sergeants Sueño and Bascom Novel series.

Martin Limón’s series set in 1970s South Korea, an era of heightened Korean sociopolitical tension, pits Army CID agents Sueño and Bascom against a mysterious woman who may be the leader of a gang—or a thousand-year-old creature.

Three American GIs have gone missing in different South Korean cities. Sergeants George Sueño and Ernie Bascom, agents for the Army CID, link the disappearances to a woman locally rumored to be a gumiho, a legendary thousand-year-old nine-tailed fox disguised as a woman. George suspects that the woman is no mythical creature, but a criminal who’s good at covering her tracks.

Meanwhile, George and Ernie are caught in a power struggle between two high-ranking women in the 8th Army. Scrambling to appease his boss and stay one step ahead of a psychotic mastermind, George realizes he will have to risk his life to discover the whereabouts of his fellow countrymen.

Martin Limón retired from military service after twenty years in the US Army, including ten years in Korea. He is the author of eleven previous novels in the Sergeant George Sueño series: Jade Lady Burning, Slicky Boys, Buddha’s Money, The Door to Bitterness, The Wandering Ghost, GI Bones, Mr. Kill, The Joy Brigade, The Iron Sickle, The Ville Rat, and Ping-Pong Heart, as well as the short story collection Nightmare Range. He lives near Seattle.

Praise for The Nine-Tailed Fox

"An enduring and freshly relevant series by Martin Limón . . . Mr. Limón, himself a former U.S. Army man who served 10 years in Korea, writes with knowledge of the travails and rewards of military life."
—The Wall Street Journal

"The Nine-Tailed Fox is a fast paced, action-packed yarn that will keep you glued to your seat from the first page to the last.
— San Antonio Express-News​

"A fast-paced, enjoyable story that is fun and easy to read . . . if you love a fast-paced, humorous crime novel, don’t miss it."
​​—New York Journal of Books

Praise for the Sueño and Bascom series

“What a great gift any of Limón's six mysteries starring Army Sgts. George Sueño and Ernie Bascom would make for those mystery lovers who haven't yet discovered them! . . . Imbued with affecting characters, a morally knotty storyline, and a last chapter that just plain stuns.”
—Maureen Corrigan, NPR.org

“Limón has a profound ability to depict everyday South Korean civilian life in a police state . . . He doesn't just describe the clamor and sweat inside an ex-pat bar crowded with GIs. He drops you onto the bar stool and hands you a glass.”
—The Arizona Republic

“Often praised for his knowledge of Korean society and culture and the massive footprint of the US Army on Korea, Limón has an outstanding series going, and this one may be the best installment yet.”
—Booklist, Starred Review

“Limón engages readers by blending Korean history, lore and geography with a tightly developed plot . . . Sueño and Bascom are a fascinating pair who add occasional levity without overshadowing the gravity of the novel's subject matter.”
—Shelf Awareness