The Ville Rat (A Sergeants Sueño and Bascom Novel #10) (Paperback) 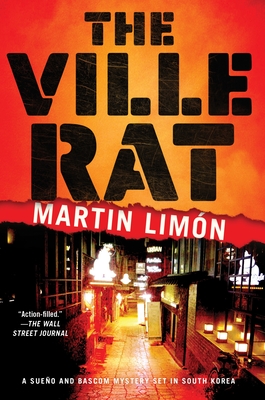 This is book number 10 in the A Sergeants Sueño and Bascom Novel series.

How much can murder buy on the black market in 1974 South Korea?

South Korea, 1970s: A young Korean woman dressed in a traditional chima-jeogori is found strangled to death on the frozen banks of the Sonyu River with only a carefully calligraphed poem in her sleeve. George Sueño and Ernie Bascom, sergeants in the US 8th Army CID, are called in by the formidable KNP detective Gil Kwon-up to investigate. George and Ernie's job is to liaise with Korean law enforcement on matters that may involve or implicate 8th Army American servicemen.

But as they learn about the case, George and Ernie realize this isn't their jurisdiction—the nearby village of Sonyu-ri is occupied by the US Army's 2nd Infantry Division, a disciplined and often brutal force that won't stand for outside officers questioning its men. All that George and Ernie are able to glean before being kicked out of town is that they are close to the truth—and that a mysterious smuggler, known locally as "the Ville Rat," holds the key to the woman's murder.

Luckily, the pair is officially assigned another investigation in the area, which allows them to continue nosing around for answers. They are to elucidate the circumstances of a shooting incident between a young African American private and his white supervising chief. Racial tensions run high, and George and Ernie must tread carefully to solve both cases. But they aren't exactly known for going out of their way to avoid stepping on US Army toes, and this is no exception.

Martin Limón retired from military service after twenty years in the US Army, including ten years in Korea. He is the author of nine previous novels in the Sueño and Bascom series, including Jade Lady Burning, Slicky Boys, and The Iron Sickle, and the short story collection Nightmare Range. He lives near Seattle.

Praise for The Ville Rat

"Propulsive . . . If you’re not familiar with this superlative series, The Ville Rat will give you a taste of everything you’ve been missing. The books palpably recreate the tension that existed in the decades after the Korean Conflict as Vietnam raged—while offering a vivid picture of military milieu."
—The Arizona Republic

"The Ville Rat, set 40 years ago, provides insight into tensions and conflicts—racial and otherwise—in the military and society as a whole that are still relevant today."
—Shelf Awareness

"The chemistry between intense Sueño and laconic Bascom is the clear reason to follow this series, but alongside that chemistry as a draw for these books is Limón’s masterful evocation of military life."
—Open Letters Monthly

“Often praised for his knowledge of Korean society and culture and the massive footprint of the U.S. Army on Korea, Limón has an outstanding series going, and this one may be the best installment yet.”
—Booklist, Starred Review

"Sueño and Bascom's [tenth] appearance has vivid characters, and its searing portrait of the sins of our recent past bids fair to transcend the genre."
—Kirkus Reviews

Praise for the Sueño and Bascom series

“Limón is one of the best military writers ever.”
—Lee Child

“As always, the author vividly contrasts adventures in the seamy side of Seoul’s nightlife with a sensitive appreciation for Korea’s ancient culture.”
—The Seattle Times

“This series is a must not only for procedural fans but also for anyone who enjoys crime fiction set in distinctive international locales.”
—Booklist, Starred Review

"Excellent . . . A vivid view of Asia, from the Demilitarized Zone to the Yellow Sea, and an insightful look at the era."
—Publishers Weekly, Starred Review