The Iron Sickle (A Sergeants Sueño and Bascom Novel #9) (Paperback) 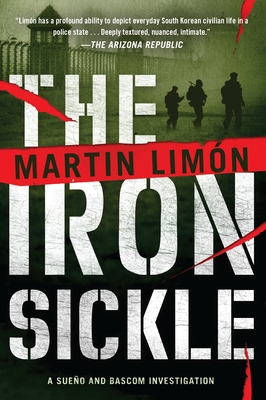 This is book number 9 in the A Sergeants Sueño and Bascom Novel series.

When a U.S. Army Claims officer stationed in South Korea is murdered in grisly fashion the roustabout duo of George Sueño and Ernie Bascom go against orders to track a calculating killer.

Early one rainy morning, the head of the 8th United States Army Claims Office in Seoul, South Korea, is brutally murdered by a Korean man in a trench coat with a small iron sickle hidden in his sleeve. The attack is a complete surprise, carefully planned and clinically executed.  How did this unidentified Korean civilian get onto the tightly controlled US Army base? And why attack the claims officer—is there an unsettled grudge, a claim of damages that was rejected by the US Army?

Against orders, CID agents George Sueño and Ernie Bascom start to investigate. Somehow, no one they speak to has been interviewed yet. The 8th Army isn't great at solving cases, but they aren't usually this bad, either. George and Ernie begin to suspect that someone doesn’t want the case solved.

Martin Limón proves once again why he is hailed by his peers as one of the greatest military writers of his time.

Praise for The Iron Sickle

"As always, the author vividly contrasts adventures in the seamy side of Seoul’s nightlife with a sensitive appreciation for Korea’s ancient culture."
—The Seattle Times

"Limón has a profound ability to depict everyday South Korean civilian life in a police state, where anyone can be taken off the streets and lost to an impersonal bureaucratic machine . . . His vivid portraits of Korea, particularly the Itaewon district where Sueño and Bascom often work black-market duty, are deeply textured, nuanced, intimate. He doesn't just describe the clamor and sweat inside an ex-pat bar crowded with GIs. He drops you onto the bar stool and hands you a glass."
—Robert Anglen, The Arizona Republic

"Limón engages readers by blending Korean history, lore and geography with a tightly developed plot . . . Sueño and Bascom are a fascinating pair who add occasional levity without overshadowing the gravity of the novel's subject matter."
—Shelf Awareness

"Readers will feel as if they are right there alongside Sueño and Bascom exploring the foreign Korean landscape."
—Bookreporter.com

“The Iron Sickle is a great introduction to the Sueño-Bascom series while building on what came before. Limón looks at history and culture, and at the sins of each, with two heroes who understand the true meaning of justice. You’ll be going back for the other books after you’ve read this one.”
—Scott Montgomery, BookPeople Bookstore

“Limón brilliantly combines a procedural with a harrowing portrayal of the wounds of war . . . The secret at the heart of the crimes is truly chilling, and Limón's nuanced characters enhance a fast-paced, carefully crafted plot.”
—Publishers Weekly, Starred Review

Praise for the George Sueño and Ernie Bascom series

"Limón is one of the best military writers ever. His stories are addictive entertainment today—and valuable slices of history tomorrow."
—Lee Child

"Limón is an expert guide to Korea and the U.S. army whose passionate commitment to his subject is expressed in direct, searing prose."
—John Burdett, international bestselling author of Bangkok 8

"[Combines] the grim routine of a modern police procedural with the cliff-hanging action of a thriller movie."
—Wall Street Journal

"[W]hat a great gift any of Limón's six mysteries starring Army Sgts. George Sueño and Ernie Bascom would make for those mystery lovers who haven't yet discovered them! . . . Imbued with affecting characters, a morally knotty storyline, and a last chapter that just plain stuns."
—Maureen Corrigan, NPR.org

"Throughout this critically acclaimed series, Limón has displayed a remarkable talent for weaving his background knowledge of the country into his plots."
—Booklist