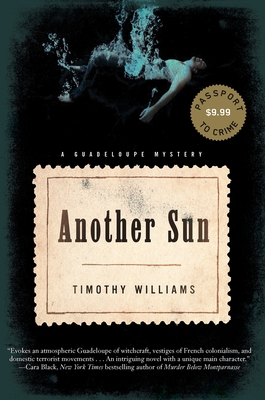 By Timothy Williams
$9.99
This book is either backordered or a preorder! Please email for more information

This is book number 1 in the An Anne Marie Laveaud Novel series.

The long-awaited return of Timothy Williams, CWA award-winning grand master of crime fiction, whom The Observer named one of the “10 Best Modern European Crime Writers”

The sun-drenched Caribbean island of Guadeloupe is technically part of France, subject to French law and loyal to the French Republic. But in 1980, the scars of colonialism are still fresh, and ethnic tensions and political unrest seethe just below the surface of everyday life.

French-Algerian judge Anne Marie Laveaud relocated to this beautiful Caribbean island confident that she could make it her new home. But her day-to-day life is rife with frustration. Now she is assigned a murder case in which she is sure the chief suspect, an elderly ex-con named Hégésippe Bray, is a political scapegoat. Her superiors are dismissive of her efforts to prove Bray innocent, and to add insult to injury, Bray himself won’t even speak to her because she’s a woman. But she won’t give up, and Anne Marie’s investigations lead her into a complex tangle of injustice, domestic terrorists, broken hearts, and maybe even voodoo.

CWA award-winning author Timothy Williams has written six crime novels set in Italy featuring Commissario Piero Trotti, as two novels set in the French Caribbean, Another Sun and The Honest Folk of Guadeloupe. In 2011, the Observer placed him among the ten best modern European crime novelists. Born in London and educated at St. Andrews, Williams has taught at the universities of Poitiers in France, Bari and Pavia in Italy, and at Jassy in Romania. He taught for thirty in the French West Indies but now spends his time between Europe and Africa. For more information, visit his website: https://www.facebook.com/thdw.co.uk.

Praise for Another Sun

"In Another Sun, Timothy Williams takes us on a tour of an island we think we know something about, but goes deep into the true Guadeloupe as only someone intimately familiar with the place can truly go. Anne Marie Laveaud is a woman of sharp smarts and tenacity, and the storyline offers fresh surprises throughout."
—Sarah Weinman, editor of Troubled Daughters, Twisted Wives

"Another Sun evokes an atmospheric Guadeloupe layered by witchcraft, vestiges of French colonialism, and domestic terrorist movements, yet grounded by the heart. An intriguing novel with a unique main character in Judge Anne Marie Laveaud."
—Cara Black, national bestselling author of Murder Below Montparnasse

“Fans of Williams’s other books and readers who enjoy their crime fiction set in exotic locations will welcome Anne Marie with open arms.”
—Library Journal

“Williams delivers a saga of dying French colonialism in 1980 Guadeloupe—a story as convoluted as the racial strains afflicting he island’s diverse, contentious population.... Laveaud, despite a strong sense of justice, is buffeted endlessly by the strong winds of change that engulf one mere murder.... [A] tapestry of colonial misrule.”
—Publishers Weekly

“Another Sun is a complex, atmospheric novel, made all the more fascinating by Williams’ painstaking attention to sensory, sociopolitical, and historical detail, and by the author’s obvious passion for the written word.”
—Mystery Scene Magazine

"Another Sun is a distinct, involving, and entertaining addition to the top rank of crime fiction."
—International Noir Fiction

"In Another Sun Williams provides an interesting view into the politics and race relations of a small island under colonial rule.... Not everyone welcomes the ruling power and intrigue abonds...."
—Crimespree Magazine

"A tale of envy and greed and sex envenomed by the inevitable racism of colonial politics."
—The Advocate

“Williams captured the essence and spirit of Guadeloupe and its people beautifully. His story telling style is notably subtle, often requiring his audience to come to conclusions about crucial plot markers of their own accord.”
—Booklover Book Reviews

"Dark, gritty. This one is really interesting."
—Good Morning Texas

"The writing here reveals a veteran’s confidence and at the same time features an enthusiasm you might expect from an author much earlier in his career. The complex interactions between the characters are handled delicately and their feelings and intentions are conveyed in language both subtle and plain. This novel has restored my faith in the possibility of finding something new in a sea of the familiar. Highly recommended."
—HorrorWorld

"You may think you know where this well plotted novel is going but Timothy Williams has some major and even unsettling surprises in store for you... and the issues this story raises will linger long after you finish it."
—Book Loons