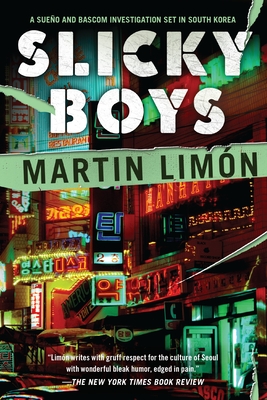 This is book number 2 in the A Sergeants Sueño and Bascom Novel series.

The Slicky Boys rule the back alleys of 1970s Seoul. They can kill a man in a thousand gruesome ways. And you’ll never even see them coming. In order to combat the poverty facing South Korea, they sneak onto well-stocked American military compounds to steal, murder anyone in their way, and vanish. US Army Sergeant George Sueño and his partner, Ernie Bascom, take on the perilous mission of infiltrating this underground criminal syndicate when an innocent favor for an Itaewon bar girl leads to murder.

“It’s great to have these two mavericks back. . . . Mr. Limón writes with gruff respect for the culture of Seoul and with wonderful bleak humor, edged in pain, about G.I. life in that exotic city.”
—The New York Times Book Review

“Combining the grim routine of a modern police procedural with the cliffhanging action of a thrilling movie serial, Slicky Boys is full of sharp observations and unexpected poignancy.”
—The Wall Street Journal

“Two of the more memorable sleuths in the modern mystery canon.”
—The Cleveland Plain Dealer

“The writing is plain and sinewy, the characterizations are quietly brilliant and the moral vision is as cold as a Seoul bar girl’s gaze.”
—The Oregonian