Assault and Flattery: The Truth About the Left and Their War on Women (Hardcover) 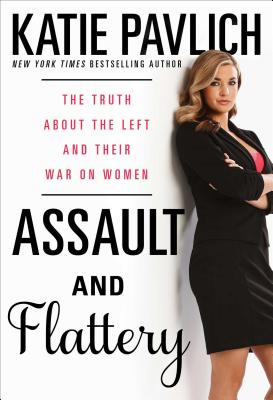 By Katie Pavlich
$26.00
This book is either backordered or a preorder! Please email for more information

New York Times bestselling author and FOX News contributor Katie Pavlich exposes the truth behind the real war on women—the one being waged by Democrats.

Assault and Flattery goes beyond the Democratic Party’s rhetoric and exposes its shocking and sustained assault on American women that has lasted for generations. And in some cases, the word “assault” is quite literal. Katie Pavlich thinks the Democrats have run the conversation for too long—and is out to debunk the sacred cows of the so-called Republican War on Women.

In the vein of fellow female pugilists Ann Coulter and Michele Malkin, Assault and Flattery exposes the truth about the Democratic stance toward women on every major current issue and in every liberal stronghold, including: abortion, self-defense, the myth of the women’s vote, Hollywood, academia, and more. Using original reporting and interviews, Pavlich deftly exposes the liberal heroes of the women’s movement to show us the frauds they really are—including such revered figures as Bill Clinton and Barack Obama, often called the most pro-woman president in history.

Assault and Flattery is a book about women, but it’s for fathers, husbands, sons, and boyfriends, too. As Katie Pavlich explains, what the Democratic Party is doing to women, it is doing to us all. By segregating us by gender, they’re harming our future.

Katie Pavlich is the editor for Townhall.com covering the White House and Washington, DC. She is the award-winning author of Assault and Flattery and the New York Times bestseller Fast and Furious. As a Fox News contributor, Katie regularly co-hosts the daytime show Outnumbered, fills in as a guest co-host on The Five and appeared weekly on The O'Reilly Factor and The Kelly File. Katie is a graduate of the University of Arizona with a degree in Journalism and is a former National Review Washington Fellow. She is a current fellow for the Foreign Policy Initiative. Katie has shared her perspective on multiple media venues including Fox News, CNN, MSNBC, CNBC, and Fox Business, in addition to a host of national and local radio shows. She is a regular speaker on college campuses across the country and regularly participates in conference panels. In 2012, Red Alert Politics named Katie as one of the top 30-under-30 young professionals in the conservative movement. In 2013, Katie received the CPAC Blogger of the Year Award from the American Conservative Union and in 2014, she was named Woman of the Year by the Clare Boothe Luce Policy Institute.

“Katie Pavlich stands up for women everywhere by exposing the blatant hypocrisy of the Democratic Party and its phony ‘war on women’ mantra against Republicans. This is a thorough and gutsy book that should help set history straight.”
— --Mark R. Levin, #1 New York Times bestselling author of The Liberty Amendments

“BOLD, BEAUTIFUL, AND BRILLIANT: Katie Pavlich is a role model for every young woman in America who truly believes in female empowerment. Her new book is a tour de force that deconstructs left-wing feminist myths and exposes the worst misogynists from Hollywood and the Democrat Party. Mamas, don't let your babies grow up to be brainwashed government dependents. Buy this book!”
— --Michelle Malkin, #1 New York Times bestselling author of Culture of Corruption

“In Assault and Flattery, bestselling author Katie Pavlich shows once again why she's one of the country's top conservative reporters. This fun and engaging book will definitely turn any number of myths about Democrats and their so-called support of women on their head. This is a book to give to anyone in need of being immunized from the false narrative endlessly perpetuated by the mainstream media.”
— --Sean Hannity, #1 New York Times bestselling author of Conservative Victory

“Modern American women: smart, strong, accomplished, beautiful. And Target #1 for the Left in its ‘divide and conquer’ strategy to grab their votes and lock them into its cult of victimhood and dependency. Katie Pavlich blows the lid off the lies the Left tells women, from abortion to guns---and shows them that REAL liberation is thinking--and doing--for themselves.  That is TRUE Girl Power.”
— --Monica Crowley, New York Times bestselling author of What the (Bleep) Just Happened?