Here We Go Again: My Life In Television (Paperback) 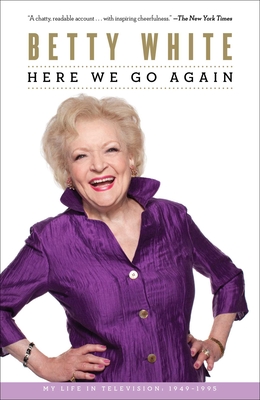 A memoir of Betty White's first five decades on television—as irreverent and irresistible as the beloved actress herself—filled “with inspiring cheerfulness” (The New York Times).

Betty White first appeared on television in 1949 and went on to have one of the most amazing careers in TV history, starring in shows such as The Mary Tyler Moore Show and The Golden Girls, among many others. She was one of the hardest-working actresses of any era, and her sense of humor and perennial optimism carried her through decades of industry changes and delighted millions of fans.

Here We Go Again is a behind-the-scenes look at Betty’s career from her start on radio to her first show, Hollywood on Television, to several iterations of The Betty White Show and much, much more. Packed with wonderful anecdotes about famous personalities and friendships, stories of Betty’s off-screen life, and the comedienne’s trademark humor, this deliciously entertaining book will give readers an entrée into Betty’s fascinating life, confirming yet again why this funny lady was one of the most memorable and beloved actresses of all time.

Betty White was a beloved American actress and comedian, and spent over seven decades in show business. She starred in many successful series, including The Mary Tyler Moore Show, The Golden Girls, and Hot in Cleveland. She also made numerous guest appearances on game and talk shows, and narrated the Tournament of Roses Parade for twenty years and the Macy's Thanksgiving Day Parade for ten. White received eight Emmy awards and in 2010 she was presented with the Screen Actors Guild Lifetime Achievement Award. She is also the recipient of three American Comedy Awards (including a Lifetime Achievement Award in 1990), and two Viewers for Quality Television Awards. She was inducted into the Television Hall of Fame in 1995 and has a star on the Hollywood Walk of Fame. She died in Los Angeles on December 31, 2021 at the age of ninety-nine.

" [An] entertaining and insightful autobiography. White’s love of friends, family, work, and animals comes shining through these pages, as does her high-energy pleasant personality.”
–Library Journal