Of Love and Other Demons (Vintage International) (Paperback) 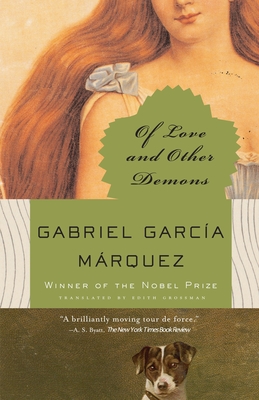 On her twelfth birthday, Sierva Maria – the only child of a decaying noble family in an eighteenth-century South American seaport – is bitten by a rabid dog. Believed to be possessed, she is brought to a convent for observation. And into her cell stumbles Father Cayetano Delaura, who has already dreamed about a girl with hair trailing after her like a bridal train. As he tends to her with holy water and sacramental oils, Delaura feels something shocking begin to occur. He has fallen in love – and it is not long until Sierva Maria joins him in his fevered misery. Unsettling and indelible, Of Love and Other Demons is an evocative, majestic tale of the most universal experiences known to woman and man.

Gabriel García Márquez was born in Colombia in 1927. He was awarded the Nobel Prize in Literature in 1982. He is the author of many works of fiction and nonfiction, including One Hundred Years of Solitude, Love In The Time Cholera, The Autumn Of The Patriarch, The General In His Labyrinth, and News Of A Kidnapping. He died in 2014.


This book is translated by Edith Grossman, widely recognized as the preeminent Spanish to English translator of our time.

“A brilliantly moving tour de force.” —A.S. Byatt, The New York Times Book Review“A work of considerable beguilement and edge. . . . García Márquez retains a vital and remarkable voice, and the pen of an angel.” —Los Angeles Times Book Review “Captivating. . . . Evokes the texture of a civilization, while its emotional range, from the comic to the mystical, exhibits a reach rarely found in fictions on a larger scale.” —The Boston Globe“Luminous. . . . Demonstrates that one of the masters of the form is still working at the height of his powers.” —The New York Times