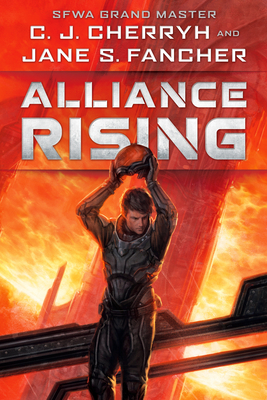 By C. J. Cherryh, Jane S. Fancher
$18.00
This book is either backordered or a preorder! Please email for more information

This is book number 1 in the The Hinder Stars series.

For years, the stations of the Hinder Stars, those old stations closest to Sol, have lagged behind the great megastations of the Beyond, like Pell and Cyteen. But new opportunities and fears arise when Alpha station, the oldest of them all, receives news of a huge incoming faster-than-light ship with no identification. The denizens of Alpha wait anxiously for news about the outsiders, each with their own suspicions about the ship and its motivations.

Ross and Fallan, crew members of the Galway, believe the unidentified ship belongs to Pell and has come to investigate another massive ship docked at Alpha, The Rights of Man. Though Rights is under the command of the Earth Company, it is not quite perfected—and its true purpose is shrouded in mystery.

James Robert Neihart, the captain of the strange ship—finally identified as one of the two largest ships of the Beyond, the Merchanter vessel Finity's End—has heard whispers of The Rights of Man and wonders at its design and purpose, especially as Sol has struggled to rival the progress of the Farther Stars. Now docked at Alpha, he must convince the crews that there is more to The Rights of Man than meets the eye.

Because the reasons behind the creation of The Rights of Man, and its true plans, could change everything—not just for Sol, but for the Hinder Stars and the Beyond itself.

With more than seventy books to her credit, and the winner of three Hugo Awards, C. J. Cherryh is one of the most prolific and highly respected authors in the science fiction field, and has been named a Damon Knight Memorial Grand Master by the Science Fiction Writers of America. She lives in Washington state.

Born in Renton, Washington, Jane S. Fancher grew up raising and training horses, learning to fly a plane, playing piano, singing, drawing, and studying math, physics, astronomy, and anthropology. While working for WaRP Graphics (Elfquest), she joined a project to produce a graphic adaptation of C. J. Cherryh’s Gate of Ivrel. This endeavor led her to a new home in Oklahoma City, where she found her calling and began writing her own novels. She lives in Spokane, Washington with partner C. J. Cherryh.

Praise for the Alliance-Union universe:

"[Downbelow Station] has a marvelous perspective on humanity in the wider universe.... The plot is a complex maneuvering of factions and realignment of interests. There are space battles, and there are economics of space stations.... It's a novel about desperate people, desperate spacestations, desperate aliens, a desperate spacefleet that's out of choices." —Jo Walton, Hugo- and Nebula-award winning author of Among Others

"Take one highly vulnerable space station. Pack it with realistic characters. And then start a war. You'll end up with 1982's Hugo winner, Downbelow Station, by C.J. Cherryh—and a hell of a story." —io9

"A solid, vividly realized background; excellent characterization of humans and aliens; and an ability to keep a story moving.... Intelligent space adventure, conceived and executed on a grand scale." —Booklist

"Merchanter's Luck is a story of transformation, not magical or mysterious but accomplished slowly through hard work. It is also about the power of misunderstanding and the courage of trust.... Filled with background details, customs, and a past, Merchanter's Luck is another exceptional C.J. Cherryh novel." —Science Fiction Review

"Cherryh tantalizes our minds with these enigmatic aliens, captures our hearts with her characters, and involves us completely with her mix of broad and narrow views of a culture's rise. Once again, Cherryh proves herself a consistently thoughtful and entertaining writer." —Publishers Weekly