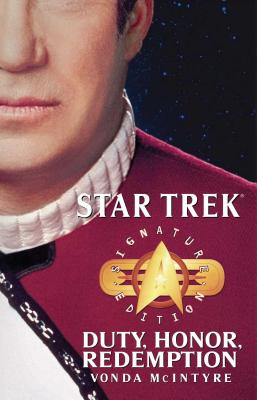 Cadets that enter Starfleet Academy have two mantras drilled into them from their very first day. They must do their duty for the Federation and Starfleet, and they must strive to honor their oath as Starfleet officers. Among those who have best embodied these guiding principles and who have strived to live up to the coda "to boldly go ™" are those who once served aboard the Starship Enterprise under the command of Captain James T. Kirk. Who then, was better to guide the next generation of officers? After Kirk became an admiral, the officers of the Enterprise were promoted, and several became Academy instructors. Transformed from a ship of the line to a training vessel the Enterprise's days of active duty are behind her—until a frantic message from a distant outpost interrupts a training exercise and pulls the ship back into action.

Admiral Kirk is forced to take command of the Enterprise in order to stop an old nemesis from commandeering what could be the most deadly weapon ever devised. In the course of his actions, the crew will find itself facing death...and life—as they deliberately violate their Starfleet oaths, travel through time to save Earth, and ultimately earn redemption in the eyes of the Federation.

Now, for the first time ever in one volume here are the novelizations of three Star Trek® films: Star Trek II: The Wrath of Khan,® Star Trek III: The Search for Spock,® and Star Trek IV: The Voyage Home,® all by award-winning author Vonda McIntyre.

Vonda N. McIntyre is the author of several fiction and nonfiction books. McIntyre won her first Nebula Award in 1973, for the novelette “Of Mist, and Grass, and Sand.” This later became part of the novel Dreamsnake (1978), which was rejected by the first editor who saw it, but went on to win both the Hugo and Nebula Awards. McIntyre was the third woman to receive the Hugo Award. She has also written a number of Star Trek and Star Wars novels. Visit her online at VondaNMcIntyre.com.