The Spirit of Science Fiction: A Novel (Hardcover) 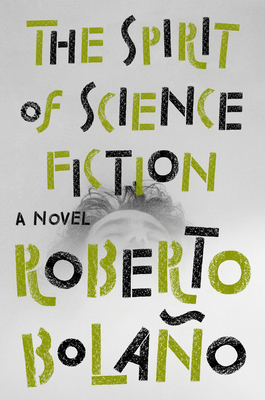 By Roberto Bolaño, Natasha Wimmer (Translated by)
$24.00
Email or call for price

From a master of contemporary fiction, a tale of bohemian youth on the make in Mexico City

Two young poets, Jan and Remo, find themselves adrift in Mexico City. Obsessed with poetry, and, above all, with science fiction, they are eager to forge a life in the literary world--or sacrifice themselves to it. Roberto Bolaño's The Spirit of Science Fiction is a story of youth hungry for revolution, notoriety, and sexual adventure, as they work to construct a reality out of the fragments of their dreams.

But as close as these friends are, the city tugs them in opposite directions. Jan withdraws from the world, shutting himself in their shared rooftop apartment where he feverishly composes fan letters to the stars of science fiction and dreams of cosmonauts and Nazis. Meanwhile, Remo runs headfirst into the future, spending his days and nights with a circle of wild young writers, seeking pleasure in the city's labyrinthine streets, rundown cafés, and murky bathhouses.

This kaleidoscopic work of strange and tender beauty is a fitting introduction for readers uninitiated into the thrills of Roberto Bolaño's fiction, and an indispensable addition to an ecstatic and transgressive body of work.

ROBERTO BOLAÑO (1953-2003) was born in Santiago, Chile, and later lived in Mexico, Paris, and Spain. A poet and novelist, he has been celebrated as "by far the most exciting writer to come from south of the Rio Grande in a long time" (The Los Angeles Times), and as "the real thing and the rarest" (Susan Sontag). Among his many prizes are the prestigious Herralde de Novela Award and the Premio Rómulo Gallegos. He is widely considered to be the greatest Latin American writer of his generation. His books include The Savage Detectives, 2666, By Night in Chile, Distant Star, Last Evenings on Earth, The Spirit of Science Fiction, and The Romantic Dogs.

Natasha Wimmer is the translator of eight books by Roberto Bolaño, including The Savage Detectives and 2666. Her most recent translations are The Dinner Guest, by Gabriela Ybarra, and Sudden Death, by Álvaro Enrigue. She lives in Brooklyn with her husband and two children.

“With words alone, Bolaño summons a visual world, creating in this book, as in his others, what Mario Vargas Llosa has called ‘images and fantasies for posterity’… admirers will find in these themes and players a satisfying proleptic glimpse of his picaresque masterpiece, 1998’s The Savage Detectives… [This] gem-choked puzzle of a book… serves as a key to Bolano’s later work, unlocking clues to his abiding obsessions … [and] is a hardy forerunner that stands on its own.” —The New York Times Book Review

“[Bolaño] is a kinetic, epiphanic writer, and even his earliest works tremble like a whirring, unpredictable machine. . . The Spirit of Science Fiction functions as a kind of key to the jeweled box of Bolaño’s fictions, an index of the images that would come to obsess him. . . . longtime Bolaño fans will doubtless enjoy this familiar cocktail of sorrow and ecstasy.” —Paris Review

“A fascinating blueprint of Bolaño’s poetics and of the extent to which he drew from the Beat literature of William S. Burroughs and Jack Kerouac . . . it also has achingly beautiful passages, and its lessons about the reach of American policy resonate to this day. A superbly talented young man wrote it, in 1984, believing that truth reached through art was the only means to revolution. In this sense, it reads like a dispatch from beyond the grave.” —The New Yorker

“This is vintage Bolaño: a lusty and rapturous shaggy-dog tale of Latin American exiles and bohemian youth.” —Vanityfair.com

“An unusual pleasure to read. You can almost feel Bolaño shaking out his limbs. . . It's a joy to watch such a brilliant stylist practice his moves, and to see such a brilliant mind expand on the page.” —NPR

“An intriguing and dreamy portrait of two writers taking different paths in their pursuit of their love of literature, hoping to discover their voices.” —Publishers Weekly

“A sort of raw spinoff of the extraordinary initial section of the first of Bolaño’s international hits, The Savage Detectives . . . Maybe it’s precisely the sense of reading a work under construction that makes The Spirit of Science Fiction such a pleasure." —Alvaro Enrigue, Book Page