Things We Lost in the Fire: Stories (Hardcover) 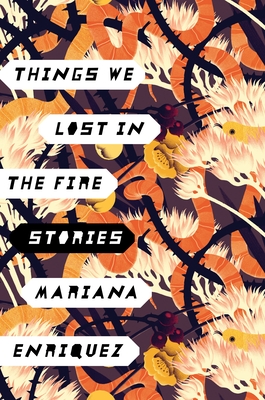 In these wildly imaginative, devilishly daring tales of the macabre, internationally bestselling author Mariana Enriquez brings contemporary Argentina to vibrant life as a place where shocking inequality, violence, and corruption are the law of the land, while military dictatorship and legions of desaparecidos loom large in the collective memory. In these stories, reminiscent of Shirley Jackson and Julio Cortázar, three young friends distract themselves with drugs and pain in the midst a government-enforced blackout; a girl with nothing to lose steps into an abandoned house and never comes back out; to protest a viral form of domestic violence, a group of women set themselves on fire.

But alongside the black magic and disturbing disappearances, these stories are fueled by compassion for the frightened and the lost, ultimately bringing these characters—mothers and daughters, husbands and wives—into a surprisingly familiar reality. Written in hypnotic prose that gives grace to the grotesque, Things We Lost in the Fire is a powerful exploration of what happens when our darkest desires are left to roam unchecked, and signals the arrival of an astonishing and necessary voice in contemporary fiction.

Mariana Enriquez is a writer and editor based in Buenos Aires, where she contributes to a number of newspapers and literary journals, both fiction and nonfiction.

Praise for THINGS WE LOST IN THE FIRE:

“Enriquez’s stories are historically aware and class-conscious, but her characters never avail themselves of sentimentalism or comfort. She’s after a truth more profound, and more disturbing, than whatever the strict dictates of realism allow….[P]ropulsive and mesmerizing, laced with vivid descriptions of the grotesque…and the darkest humor.”—New York Times Book Review

“…[S]lim but phenomenal…in [Enriquez’s] hands, the country’s inequality, beauty, and corruption tangle together to become a manifestation of our own darkest thoughts and fears. The spookiness of these 12 stories sets into the reader’s mind like a jet stone, sparkling through all that darkness.”—Vanity Fair

“Enriquez's particular gift is to intuit that horror and ghost stories - ancient genres, as old as humanity itself - might make better gateways into a country's past than straightforward narrative. Her ghosts are not conventional spectres, by any means; it is the people - homeless street children, groups of women with a collective history around burns - and the places that she writes about that are demon-haunted.”—Financial Times

“Things We Lost in the Fire is a searing, striking portrait of the social fabric of Argentina and the collective consciousness of a generation affected by a particular stew of history, religion and imagination. Mariana Enriquez has a truly unique voice and these original, provocative stories will leave a lasting imprint.”—The Rumpus

"Mariana Enriquez’s eerie short story collection, Things We Lost in the Fire, looks at contemporary life in Argentina through a strange, surreal, and often disturbing lens. In 12 stories containing black magic, a child serial killer, women setting themselves on fire to protest domestic violence, ghosts, demons, and all kinds of monsters, Enriquez unforgettably brings horror and the macabre to life."—Buzzfeed, "31 Incredible New Books You Need To Read This Spring"

"Violent and cool, told in voices so lucid they feel spoken, these 12 tales present a gothic portrait of a country tilting uneasily away from the memory of horrific traumas, as new ones lurk around every corner.”—The Boston Globe, "The Best Fiction Books of 2017"

“These stunning, incandescent stories... crackle with sophisticated weirdness, illuminating everyday activities against the underbelly of the macabre… Similar to Shirley Jackson and Jac Jemc, Enríquez is certain to dazzle and discomfit.”—Booklist

“[S]taggering in its nuanced ability to throw readers off balance… rich descriptions of narcos, addicts, muggers, and transvestites quickly transport readers to an alien world… A rich and malcontent stew of stories about the everyday terrors that wait around each new corner.”—Kirkus

“Mariana Enriquez is a mesmerizing writer who demands to be read. Like Bolaño, she is interested matters of life and death, and her fiction hits with the force of a freight train. "The Dirty Kid" is one of the most memorable and brave stories I’ve read in years. It lingers in the mind for weeks, and redefined my sense of Buenos Aires, a city I love dearly.”—Dave Eggers

"These spookily clear-eyed, elementally intense stories are the business. I find myself no more able to defend myself from their advances than Enriquez's funny, brutal, bruised characters are able to defend themselves from life as it's lived."—Helen Oyeyemi

"These stories unsettle; they disturb; they disquiet. Read them!"—Kelly Link

"When I read Mariana Enríquez's stories, I forget where I am. I miss my subway stop. I hold my breath. Her fiction is that pulse-racingly superb, that electric and original. Mariana Enríquez is an essential voice in contemporary fiction, and The Things We Lost in the Fire will be a sensation."—Laura van den Berg