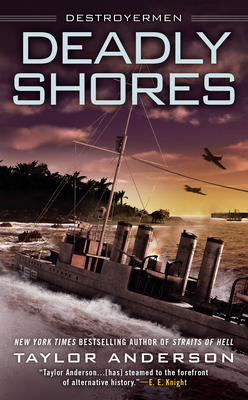 This is book number 9 in the Destroyermen series.

The Destroyermen series continues from the New York Times bestselling author of Straits of Hell.

The ambitious, long-planned raid on the Grik Empire has grown dangerously ill defined. Only Matthew Reddy, commander of the old destroyer USS Walker, seems focused on the original intent.

While many Lemurians see an opportunity to reconquer their stolen homeland, others—Lemurian and human—have their own agendas, which could compromise the Alliance. Complicating matters further is Reddy’s suspicion that his task force is being stalked by some unknown power bent on aiding the Grik for reasons of its own.

As the raid begins and chaos reigns, Reddy has no choice but to risk everything in a desperate act that results in a sprawling, nightmare battle on the beaches of “Grik City,” on the very decks of Walker, and in the labyrinthine passageways of the Celestial Palace itself. The final cost could be more than Matt Reddy—or the Alliance—can bear.

Taylor Anderson is the New York Times bestselling author of the Destroyermen novels, including Deadly Shores, Storm Surge, Iron Grey Sea, Firestorm, and Rising Tides. He is also a gunmaker and forensic ballistic archaeologist who has been a technical and dialogue consultant for movies and documentaries. He is a member of the National Historical Honor Society and the United States Field Artillery Association, which awarded him the Honorable Order of St. Barbara. He has a master’s degree in history and has taught that subject at Tarleton State University in Stephenville, Texas. He lives in nearby Granbury with his family.

"Taylor Anderson's Destroyermen...are among the strongest, most believable, and memorable characters I have ever encountered."—New York Times Bestselling Author David Weber

"Taylor Anderson...[has] steamed to the forefront of alternative history."—E.E. Knight, Author of the Novels of Vampire Earth

"If you like a fun tale set in a well-developed world, pick up the Destroyermen series and kick back and enjoy."—SFRevu