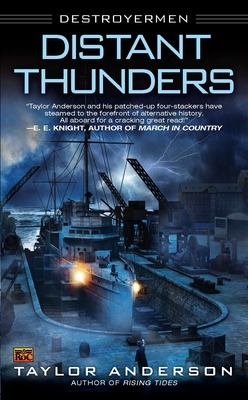 By Taylor Anderson
$8.99
This book is either backordered or a preorder! Please email for more information

This is book number 4 in the Destroyermen series.

After the terrible battle between the men of the destroyer USS Walker and their Lemurian allies against the savage Grik, Lieutenant Commander Matthew Reddy is shocked by the arrival of a strange ship captained by Commodore Jenks of the New Britain Imperial Navy—an island-nation populated by the descendants of British East Indiamen swept through the rift centuries before.

With the Walker undergoing much-needed repairs, Reddy knows the Grik have only been fended off, not defeated, and he will need all hands on deck to fight them off when they next attack--but Jenks’ loyalties seem uncertain.

As tension between the Allies and the Imperials mount, Reddy will come to realize that his suspicions are not misplaced—and that a greater danger than the Grik is about be revealed...

Taylor Anderson is the New York Times bestselling author of the Destroyermen series. A gunmaker and forensic ballistic archaeologist, Taylor has been a technical and dialogue consultant for movies and documentaries, and an award-winning member of the National Historical Honor Society and of the United States Field Artillery Association. He has a master’s degree in history and has taught that subject at Tarleton State University in Stephenville, Texas.

“Gripping and riveting...I look forward to the unfolding of this series and his subsequent work.”—S.M. Stirling, New York Times bestselling author