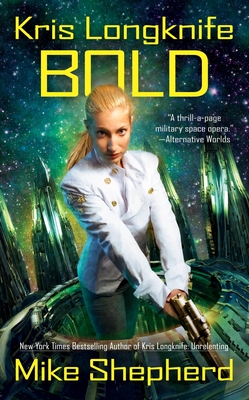 This is book number 14 in the Kris Longknife series.

Kris Longknife “can kick, shoot, and punch her way out of any dangerous situation,”* and her latest adventure in the New York Times bestelling series is as perilous as they come...

Despite her role as a fleet Admiral and protector of a planetary system, Kris is still beholden to her great grandfather King Raymond’s commands. She has been personally selected for a mission that, should she succeed, will save millions of lives.

The Peterwald Empire is in the midst of civil war. On one side is the tyrannical Empress, on the other is the last person Kris ever wants to see again—Grand Duchess Vicky Peterwald. Due to their shared history, the Emperor believes Kris can mediate between the factions and bring about peace.

But before Kris even begins her mission, she survives multiple assassination attempts on her family home world. Someone doesn’t want her interfering in the Empire’s affairs. Kris immediately suspects Vicky or the Empress, only to learn that it could also be a traitor among her own people...

Praise for the Kris Longknife Novels

“Shepherd delivers no shortage of military action, in space and on the ground. It’s cinematic, dramatic, and dynamic.”—Tor.com

“A tightly written, action-packed adventure from start to finish...Heart-thumping action will keep the reader engrossed and emotionally involved.”—Fresh Fiction