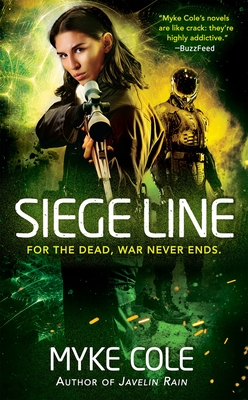 This is book number 3 in the Shadow Ops: Reawakening series.

In Myke Cole’s latest high-octane, action-packed military fantasy, the fate of undead Navy SEAL James Schweitzer will be decided—one way or another...

The Gemini Cell took everything from Jim Schweitzer: his family, his career as a Navy SEAL, even his life. Hounded across the country, Schweitzer knows the only way he can ever stop running, the only way his son can ever be safe, is to take the fight to the enemy and annihilate the Cell once and for all.

But the Cell won’t be easily destroyed. Out of control and fighting a secret war with the government it once served, it has dispatched its shadowy Director to the far reaches of the subarctic in search of a secret magic that could tip the balance of power in its favor. Schweitzer must join with the elite warriors of both America and Canada in a desperate bid to get there first—and avert a disaster that could put the Cell in control.

As a security contractor, government civilian, and military officer, Myke Cole’s career has run the gamut from counterterrorism to cyber warfare to federal law enforcement. He’s done three tours in Iraq and was recalled to serve during the Deepwater Horizon oil spill. He recently joined the cast of the TV show Hunted on CBS as part of an elite team of fugitive hunters. All that conflict can wear a guy out. Thank goodness for fantasy novels, comic books, late-night games of Dungeons & Dragons, and lots of angst-fueled writing. Myke is the author of Javelin Rain and Gemini Cell, prequels to his Shadow Ops series, which includes Breach Zone, Fortress Frontier, and Control Point.

“Intense and explosive–Cole tells a hell of a story.”—Mark Lawrence, international bestselling author of Red Sister

“Myke Cole’s novels are like crack: they’re highly addictive, and this one is no exception.”—Buzzfeed

“A heartfelt, action-packed military fantasy that punches readers in the guts and takes their breath away.”—Fantasy-Faction

“[Cole] delivers on both action and character in equal measure.”—SFRevu