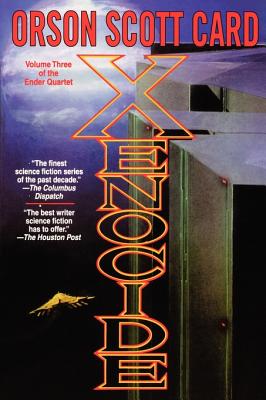 By Orson Scott Card
$19.99
This book is either backordered or a preorder! Please email for more information

This is book number 3 in the The Ender Saga series.

The war for survival of the planet Lusitania will be fought in the heart of a child named Gloriously Bright.

On Lusitania, Ender found a world where humans and pequininos and the Hive Queen could all live together; where three very different intelligent species could find common ground at last. Or so he thought.

Lusitania also harbors the descolada, a virus that kills all humans it infects, but which the pequininos require in order to become adults. The Starways Congress so fears the effects of the descolada, should it escape from Lusitania, that they have ordered the destruction of the entire planet, and all who live there. The Fleet is on its way, a second xenocide seems inevitable.

Xenocide is the third novel in Orson Scott Card's The Ender Saga.

“The finest science fiction series of the past decade.” —The Columbus Dispatch

“The best writer science fiction has to offer.” —The Houston Post

“As a storyteller, Card excels in portraying the quiet drama of wars fought not on battlefields but in the hearts and minds of his characters....This meaty, graceful, and provoking sequel to Ender's Game and Speaker for the Dead stands as a brilliant testimony to his thoughtfulness.” —Library Journal

“The best science fiction novel of the year.” —Nashville Banner